About The Core Lands

In a not so distant universe, on a world alarmingly similar to our own, can be found the largest of the six continents, The Core Lands. Set in a period not dissimilar to medieval Europe, the continent is presently divided into nine distinct realms. Eight of these realms are ruled by Kings, Queens, or in the case of the North-Western realm of Arnenheim, a collective rabble of indeterminate origin.

At the center of the eight and encircled entirely by mountains is the ninth realm known as The Core. What lies beyond the mountains remains unexplored and those fearless few who venture beyond the crags have, over the years, failed to return. Since these missing include several promising heroic types, the Trackers Guild refuses to go within five miles of the place, the Gossipers Guild spread rumors the Core is linked to the Underworld, and the head of the Guild of Adventurers has crossed it off their to-do list.

The first tales from the Core Lands, have so far, had their origins in the North-Eastern Realm of Capricus. 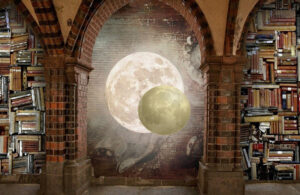 The nine realms of the Core Lands entered a period hitherto referred to as the teen ages. These difficult and rambunctious years were a mixture of rapid growth, development, with only a few minor outbreaks of feudal acne.

During this period the diverse populations of the Core continued to exist in relative harmony, with the obvious exception of Goblins and Orcs, who, by their very nature alone are always up to something…

History tells us that after thirty years of deep contemplation and study, the druids of Viante devised a calendar for the King of Lacorva. Deciding he didn’t much care for it, he tasked his twelve-year-old daughter to come up with a better one. After fifteen whole minutes of feverish scribbles, the Grunhilde Calendar was born.

Comprised of ten months, split equally into 36 days. The yearly cycle coincides with the waxing and waning of the two moons. The larger Iskov and its smaller companion, known affectionately as Dave.

The release of the Calendar coincided with the start of the continent’s Teen Age, and the swift demise of the Viantian druidic order.

Magic is commonplace across the realms. So commonplace that a seer from Surcia once stated that if you were to walk the perimeter of a large field, throwing stones in every direction, you would eventually hit someone or something infused with magic. The seer added a strong recommendation against such an action. Unless you wanted the pointed end of a wand shoved unceremoniously into an orifice you didn’t know you had.

In order to prevent random death and destruction, through magical means,  a group of responsible magic users formed the WWWs (Wizards, Witches, and Warlocks Society). They meet annually to discuss the prevention and misuse of magic and to hold an award ceremony for exceptional sorcery. This gathering only ever takes place on a Thursday due to other commitments.

During the Teen Ages, guilds would spring up faster than weeds in a badly kept garden. It got to the point where any gathering of three people or more could refer to themselves as a guild if they could come up with a decent enough title and it hadn’t already been taken.

A simple registration form completed in triplicate with a village authority, a village elder, or whoever owned the most turnips and a guild had been formed.

In addition to the larger Guilds, such as the Assassins, Inventors, Dwarf Miners and Brewer’s, a few examples of locally approved guilds include The Gawkers Guild, The Guild of Grey Sock Darners, and the highly unpopular Guild of it’s Your Turn to do the Washing-Uppers.

The desire to receive the latest news has led to the formation of several local publications and newsletters. Produced on a small scale, these publications are sold in market places or will be delivered by raven, provided an additional coin is paid, and the raven has the strength to carry them. One publication of slightly higher quality is The Capricus Herald, copies of which will be shared in the coming months.